The exponential growth in knowledge available to humans, compared to what there is to know in the Universe, seems unstoppable.

Moore's law, see 'Technology' further below this page, is analogue with Kurzweil's.
It is logic to propagate this data in the future, as Terence McKenna puts it in the top video;
the doubling of information will not take place in half a year but will occur in terms of months and even shorter,
but let's not get ahead of ourselves.

Instead, let's go further back into time even.
Some have called this a conspiracy theory, but I really like to offer nuance on that perspective; to me it's a healthy view of the evolution society has gone through, offering a bridge between religion and science.
We have always needed a sense of belonging. A destination, a goal or a dream to pursue.
Not so long ago the amount of mysteries and unanswered questions for people was so immense, refuge to spiritual guidance is a logic course of action. It was explaining the most.
What is easier to guide a misinformed crowd with than promising them a heaven, a nirvana, a life after death, as long as they worked hard enough and were good human beings but also, paid the necessary costs (ceases)?
​It is wrong to say religion and science are mortal enemies since the beginning of ages as, in fact, for a very long time - and in many cultures it still is - because of religion science was made possible. It is only at times when theories hinted to contradictions such as the earth being round, not in the center of the universe and humankind having monkeys as grandfathers it was a too big of a dissonnance for the masses so that religious leaders wished to refrain to maintain social benefit. Despite many attempts, we see a species rapidly leaning towards the dawn of a new paradigm (more on paradigms later).
I also would like to add that - from Neil deGrasse Tyson's speech above: God is seen as good,
which we think means looking out for our health and longevity, which science today proves to be doing as never before.

It is fair to say, both in times of war and peace - through motives of religion - science and society as a whole has flourished, many inventions and architectural masterpieces were built and art and music were as omnipresent as indoctrination, empowering the illiterate society in it's near industrial advancements. We changed and found truth and belief through science. 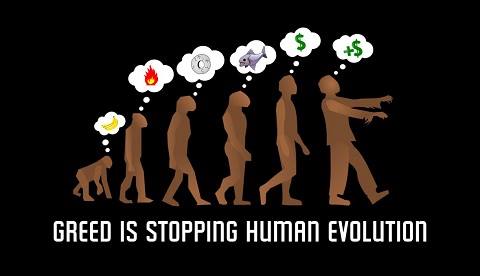 The industrialisation and accumulation of knowledge, science, studies and theories breaks the superstitious hypnosis in many cultures throughout the world, stopping them of being so dependent on religion. People became educated and have more individual opinions and taste. Instead of religion there now was a rise of capitalism and liberalism, systems for a world where everyone could make their living, or so leaders claimed and for a long time, they were right.

By rewarding labour with gold (later on rewarding it with paper and virtual money), making luxury available at the right price and by the rise of financial institutions, the certainty of everyone's chances on the market - and thus chances for a better life - were thought to be assured. As long as this economic circle functioned in a more or less closed circuit with external input, it ment small regions could benefit indeed.
Still we are told it is very important to have a job that pays well, because money, and nothing else, will make sure that all your family's basic needs are covered for. In a world where distribution, automation and productivity are enhancing, medicins and (preventive) cures are found for more and more medical conditions, money becomes a barrier to a society where everyone can be free. Our economic system has allowed the world to advance very rapidly, yet now starts to slow us down. We'll seek alternatives other than traditional solutions, society feels enslaved to a system it doesn't benefit from.
This change occurs gradually, yet at one point we'll have to work for moral reasons and build resourcebased rather than for personal profit, if we want our future to be the brightest imagineable (isn't that where we're going for?).

In a society driven by knowledge, science and technology rather than money, labour and growth without progress,
everyone can be free to openly, thoughtfully cooperate and find the benefitial solution for all of mankind.

As shown on the landing page of this website, inventor Richard Buckminster Fuller said: "It is now highly feasible to take care of everybody on Earth at a higher standard of living than any have ever known. It no longer has to be you or me. Selfishness is unnecessary, war is obsolete. It is a matter of converting the high technology from weaponry to livingry."

Gordon Moore, co-founder of Intel, in 1965 said the amount of transistors in a dense integrated circuit doubles approx. every two years. His prediction of an evolution of technology in such a way it drastically changed our lives was called Moore's law.